The CFO is becoming the driver of sustainability 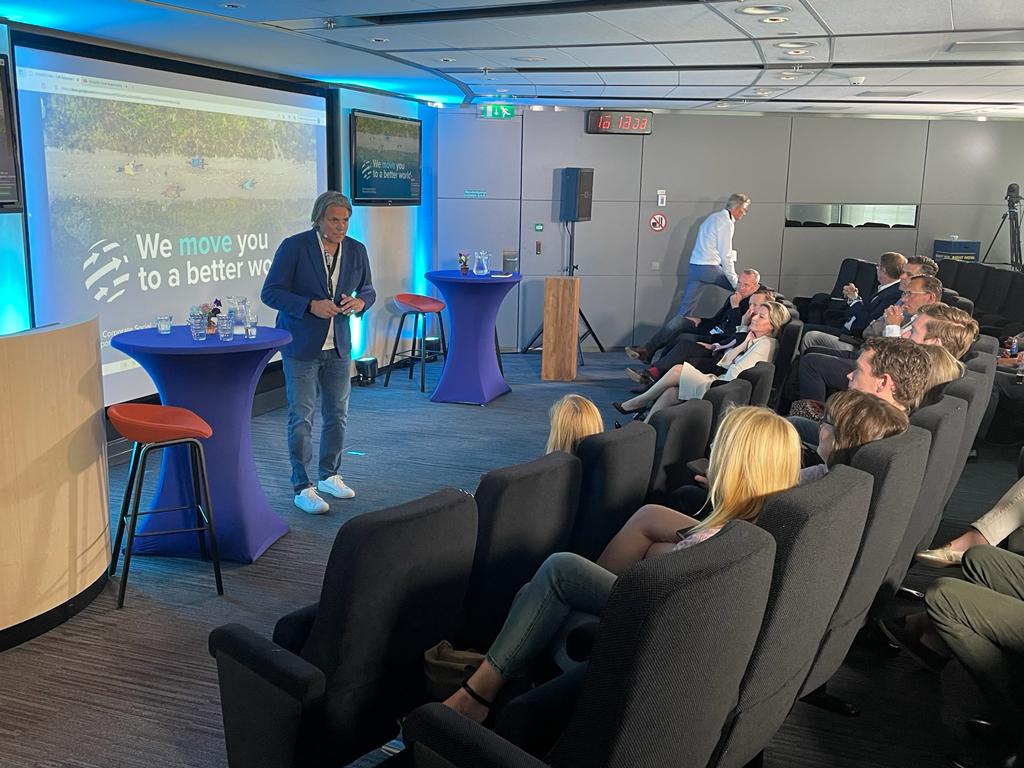 The CFO is becoming the driver of sustainability

Today’s CFO thinks proactively about putting sustainability into practice. The days when he or she was limited to reporting are over.

That was the tenor of the spring edition of Finance on a Mission on Sustainable Finance, which was held at Port of Rotterdam on May 19. The speakers and participants recognized not only the increased importance of sustainability, but also the role that Finance has to play in it. Instead of accounting for it afterwards, the CFO is increasingly becoming a driver of sustainability.

This development runs parallel to the changed meaning of sustainability. Maikel Batelaan of De Transformatie Groep put it this way during one of the two talk shows, “In the past ten years, sustainability was something to be neat and belong. The next ten years it’s something to survive. If you don’t do it, there will come a point when no one will buy your stuff anymore.’

So it’s a matter of survival. How you do that remains a search. The participants eagerly listened to the representatives of organizations that are at the forefront of this search. There was much appreciation for the story of Lars Häggström, senior advisor at IMD Business School. Previously, as head of HRM, he was jointly responsible for the resurrection of Stora Enso. This ancient Finnish-Swedish company, with roots dating back to the thirteenth century, transformed in the past decade from an ailing paper manufacturer into a thriving global supplier of renewable packaging materials.

Lars opened his contribution with a cartoon showing a woman reading from a book and telling her child that it is an iPad made of trees. At the beginning of this century, Stora Enso was slow to respond to the digitization of society. ‘The company became the face of a doomed industry,’ says Lars. The new CEO took drastic measures: in 2008, Stora Enso made major cost cuts. One of the obstacles to renewal, according to Lars, was the one-sided composition of management. Under the slogan “do you want to be one of our pathfinders?” an internal search for talent was launched. This resulted in a more diverse management of the required transformation. The strategy was also overhauled. Sustainability, customer focus and agility became the new keywords. The remuneration structure and the financial function were also transformed. The focus on short-term costs disappeared.

The impact was immense. Stora Enso became more innovative and profitable and tapped into new customer groups. Paper’s share of sales dropped from 70% in 2006 to 16 percent in 2021. Almost all the profit now comes from new business. The stock rose 300% in value. Employees are much more satisfied and engaged than ever before. For example, they now answer positively more often when being asked whether they would recommend their employer or manager.

In response to a question from the audience about how exactly to get employees more involved, Lars said that it starts with exemplary behavior from leaders coupled with transparency. Employees at Stora Enso, for example, can attend the annual meetings. Transformation is only possible by showing courage and involving employees, was Lars’ message.

Rolling up your sleeves

In the port of Rotterdam, the transformation is in full swing, as Vivienne de Leeuw, CFO of Port of Rotterdam, told us. The port is the energy hub of Europe, which goes hand in hand with considerable emissions: 22 million tons of CO2 or 13.5% of the Dutch total. One third of the turnover is invested in the complex. The port takes the sustainable development goals of the United Nations as its starting point. ‘I’m proud of that,’ Vivienne said. ‘I think that’s a more important part of my job as a CFO than reporting.’

The port is tackling sustainability by improving the infrastructure, switching to other energy sources and making transport more sustainable. By 2030 a CO2 reduction of 55% must be achieved and by 2050, the port aims to be CO2 neutral. The changes are becoming increasingly visible. For example, a biorefinery is under construction, the first shovel will soon go into the ground for the underground storage of CO2, heat from the port will be piped to 120,000 households from 2023, and Shell is building the largest hydrogen plant in Europe. ‘Where elsewhere people talk, here we roll up our sleeves,’ Vivienne said proudly. One problem, she said, is that laws and regulations often lag behind. For example, CO2 is considered waste, so the waste disposal charge applies to it. ‘But with our underground collection project, it’s not waste anymore, because we reuse the CO2. Just try to change that. You can only do things like this together with the government.’

Margareta Mucibabici, public affairs & social impact director at the originally Romanian software company UiPath, discussed the possibilities of robotization in relation to sustainability. People don’t have to become robots, she said. Employees can be more creative, empathetic and solution-oriented if robots take over the heavy and repetitive work. That makes for greater satisfaction and engagement. A large number of robotization projects involving UiPath focus on health, sustainability and social impact. For example, UiPath worked on faster and better diagnosis and treatment of Covid-19. Margareta also mentioned that it is essential to involve employees in transformation processes. Robotization projects should be done openly, not covertly, and their dividends should go toward the organization’s goals.

The two talk shows also highlighted the new interpretation of the Finance function. Edwin Kunkels, Vice President Group Reporting & Deputy Controller at Shell, said he is more concerned with climate than with dollars these days. ‘Through your daily work at Shell, you automatically become a climate expert,’ he said. According to Edwin, water, waste and biodiversity will also be increasingly on the agenda.

Marlies Janssen, Director Finance & Control at Van Oord, signaled a shift from thinking in risks to thinking in opportunities. According to Emiel Jongerius, Group Controller at AkzoNobel, shareholders are increasingly interested in sustainability. He mentioned thinking about launching and pricing sustainable products as an important new task.

When being asked by chairman Aniek Moonen, how you make sustainability live internally, Maikel Batelaan of De Transformatie Groep said, “Traditionally, as a top, you draw up your strategy and then you start talking about it. I say: turn it around. Go talk to your stakeholders about how they see your company and then discuss that internally in a structured way. Long-term transformation requires constant dialogue.’

Helen Richardson, CHRO at Renewi, also argued that you can’t flesh out sustainability from the boardroom. ‘The people pushing the bins in Amsterdam know better how to improve service than the sales people. So visit them once a month with a cake and ask for their ideas. I myself go to the sorting belt and the weighbridge every quarter. Get all your managers to do that.’ Renewi is also setting up a kids advisory board to hear the voice of the future generation.

“Clear goals help maintain long-term focus”, said Guus van der Weijden, Manager Group Planning & Performance at Achmea. His group has stated that the company wants to be carbon neutral by 2030, have a net zero footprint in investments by 2040 and have sustainable insurance by 2050. When being asked for a tip, he said: ‘Start with impact tracking on non-financial metrics and accept that it says something about the robustness of your financials instead of rolling in extra euros. Then you can say: financially it may not have been the best, but socially it was. That’s a new narrative we need to develop.’